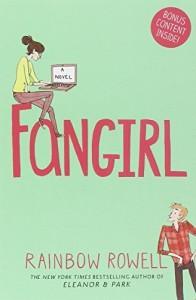 Hey everyone and how's it going? Fantastic most likely, because that is how I feel at that moment yay!!! So, as you can tell by the title, it is another review. I'm sure you're all going why?!, but I did warn you all! Today, I am reviewing "Fangirl" by Rainbow Rowell. I got a lot to say so Allons-y!

Cath is a Simon Snow fan.

Okay, everybody is a Simon Snow fan, but for Cath it's something more. Fandom is life. It's what got her and her sister, Wren, through losing their mom. It's what kept them close.

And now that she's starting college, introverted Cath isn't sure what's supposed to get her through. She’s got a surly roommate with a charming, always-around boyfriend, a fiction-writing professor who thinks fanfiction is the end of the civilized world, a handsome classmate who only wants to talk about words . . . And she can’t stop worrying about her dad, who’s loving and fragile and has never really been alone.

For Cath, the question is: Can she do this? Can she make it without Wren holding her hand? Is she ready to start living her own life? Writing her own stories?

And does she even want to move on if it means leaving Simon Snow behind?

I thought that this book was really amazing! It too paid homage of being a fangirl/boy. It had some really good and funny moments. Like when Cath and Wren had before heading to school. Cath is worried about having a creepy roommate who stays up all night to take pics of her while she slept! The adorableness of Cath and Levi that took time, Levi himself is a gentleman and always has a smile on his face. A funny reaction that Cath's roommate Reagan had, when she found out that Cath was a twin, which creeped her the hell out.

There were times of complete annoyance and anger that got to me when it came to Wren and her roommate Courtney. That needed a common sense shoe to come out of nowhere and hit them...hahaha! Cath also needed to get hit by that shoe as well a lot of time!  A scare and sad time when it came to the girls' dad, who has suffered a lot since his wife and the girls' mom ran off. This book represents some if not all of us who are such huge fans of something, rather it be Harry Potter, Doctor Who, Supernatural, anything really. That all we want to do is live and breathe our fandom and keep going, even if it's long done and some fans have moved on. It also, represents to some some real stuff that is written like dealing this anxiety and depression.

It doesn't matter how old we all are, we all have something that we are such huge fans of and would go at nothing but to create magic for us and those who are still on the train. We should all celebrate our inner and outer Geek! Not let others tell you that you're too old to be apart of your fandoms. But, to also remember to live your life outside of your fandom as well!

Well, that is it from me. I will be back on Thursday with a new review! Until then be awesome and do awesome!